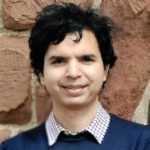 Ajay joined University of Liverpool in 2021 as a Research Associate in Prof. Rosseinsky’s research group. Currently his research focuses on developing advanced catalytic formulations to enable effective transformation of polymer waste to chemicals or fuels. He received his MSc in Organic Chemistry from University of Pune, India. After that Ajay worked with National Chemical Laboratory (NCL), Pune, on the project entitled valorisation of biomass to chemicals under supercritical environment. Later he moved to University of Artois, France, and completed his PhD in Spécialité Molécules et Matière Condensée in 2017. His thesis work was focused on development of supported metallic catalysts for the direct amination of alcohols and was carried out at three institutes: i) Ecole Centrale Lille (ECL) ii) UCCS-Artois, Lens and iii) E2P2L, Solvay, Shanghai. Following his doctorate degree, he worked as a postdoctoral researcher (2018-2019) at University of Artois, where he successfully completed a project based on bio-alcohols to polycarbonates in collaboration with Roquette Frères company. His areas of interests are heterogeneous catalysis, biomass & CO2 conversion, hydrogenation, amination, carbonation and supercritical fluids. In his free time, Ajay enjoys painting, travelling and yoga.

Join the CE-Hub and guest speakers to explore measurements and…