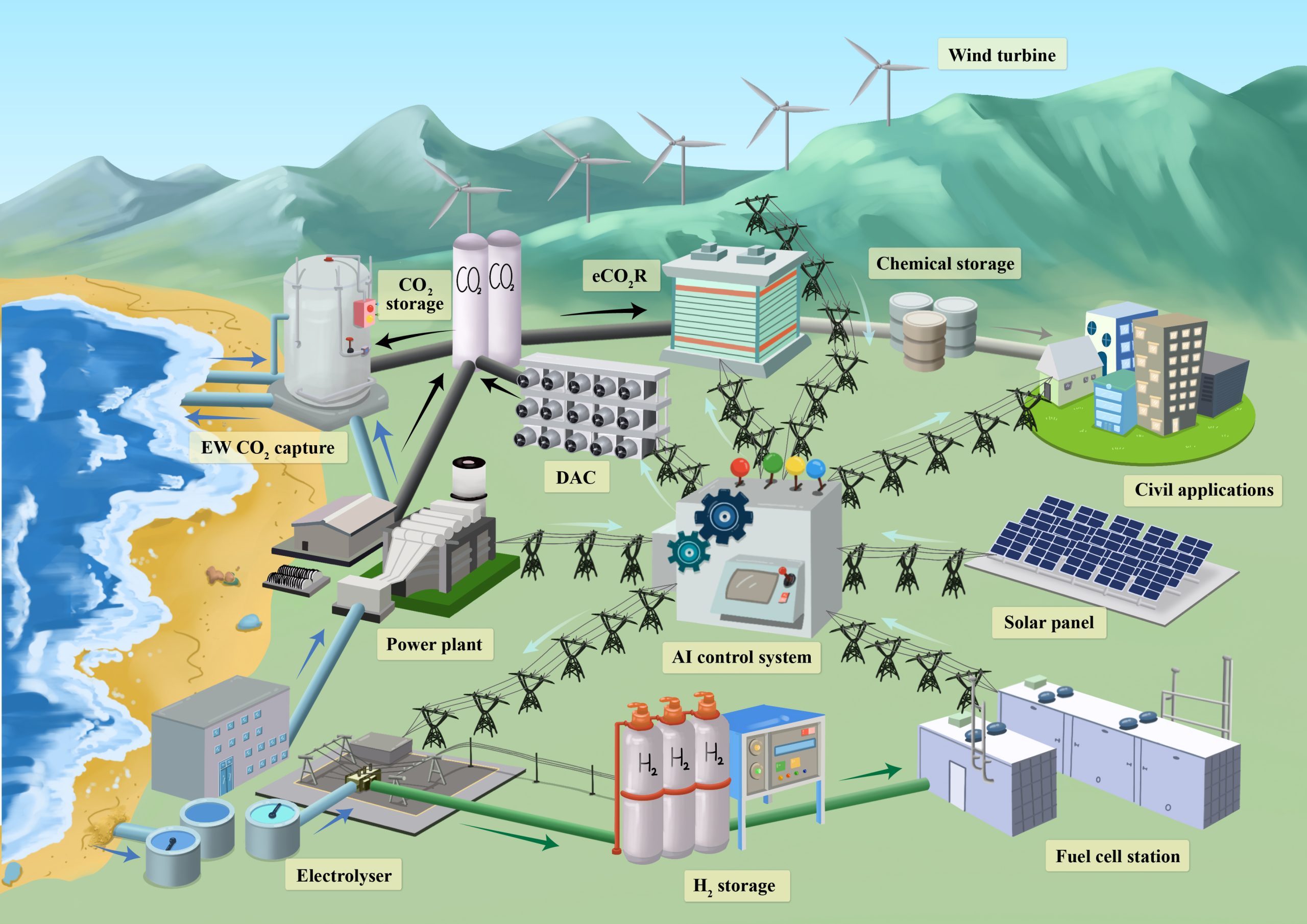 Switching traditional industry to circular economy could significantly reduce CO2 emission to avoid climate breakdown. Carbon capture, utilisation and storage (CCUS) is capable of converting CO2 from industrial sources or directly from the atmosphere into valuable chemical products, so as to close the carbon loop. To achieve this goal, a novel system based on renewable energy sources is required to effectively distribute materials and energy between different sectors in the system. Although renewable energy sources, e. g. solar and wind sources, play a pivotal role in the decarbonisation of energy systems, it poses a significant challenge in management due to their variable and intermittent nature.

To address this issue, an AI control system of electricity distribution is proposed to link four inputs and four outputs of electricity. The electricity generated by power plant, solar panel, wind turbine and fuel cell station are collected and then transmit to direct air capture (DAC), electrolyser, electrochemical CO2 reduction (eCO2R) and civil applications. Based on the historic data of intermittent solar and wind sources, a central control system based on advanced AI algorithm could sophisticatedly manipulate the input and output electricity and more effectively transmit electricity to corresponding sectors.

The goal of this energy system is to close the carbon loop by circulating carbon through industrial and natural routes. In the industrial route, CO2 is converted into valuable chemicals for civil applications. On the contrary, CO2 is converted into bicarbonate and carbonate and stored in the ocean. CO2 returns into the atmosphere as a consequence of the consumption of chemicals by end-user or the CO2 desorption of ocean, the released CO2 in the atmosphere is captured by DAC. It is also important to capture CO2 from the source, e. g. the flue gas from power plants, that includes 5-20% CO2. The captured CO2 is stored in a CO2 storage tank, in which a portion is sent to eCO2R to produce valuable chemical products for civil applications. The other portion is sent to a chemical reactor to perform enhanced weathering (EW), where CO2 reacts with alkaline minerals and converts to bicarbonate and carbonate and stored in the ocean. The distribution of CO2 in eCO2R and EW reactors is determined by the availability of electricity, which is associated with the AI control system.

To mitigate the variability of renewable energy sources, a hydrogen-based sub-system, including electrolyser, H2 storage and fuel cell station, is also integrated. The redundant electricity is used to produce hydrogen through electrolysing seawater, which is stored and convert back to electricity through fuel cell stations during peak electricity consumption. The solution after electrolyser is sent to power plant for cooling and then to EW reactor. Due to the weakly alkaline nature of the solution, it could accelerate the reaction between minerals and CO2 for CO2 capture. As the reactant and energy carrier, seawater also complete a cycle in the system.

A system-scale model requires the integration of several reactor-scale models, that is not technically feasible for dynamic optimisation owing to the complexity of solving a large number of partial differential equations (PDEs). To solve this problem, data-driven surrogate models are developed to replace the mechanistic simulation models of different reactors. The surrogate models are advantageous in computational efficiency due to the simplification of PDEs to reduced order expressions. The system-level model established through the integration of surrogate models of different reactors could significantly reduce the computational time while maintaining computational accuracy. With the help of AI algorithm, a dynamic optimisation of electricity distribution could be achieved to mitigate the intermittency and fluctuations of the energy system. The AI-aided circular chemical system is a promising future of the ‘net zero’ human society.

Future of the chemical industry: An ED&I perspective

Please join us for this exciting online roundtable discussion on…

Join us at our annual Research Showcase bringing you exciting…